So having spent some time fumbling around in octopress, I’ve made my first modification. Internet Explorer is a constant source of pain when theming websites. As this is my personal blog there isn’t really a reason to be particularly friendly to Internet Explorer, and so I thought why not prompt my visitors to install Chrome Frame.

Chrome Frame effectively replaces the rendering engine of IE with Google Chrome through a plugin for IE. In effect users who install it are now running Chrome, and as such are treated with properly working CSS/HTML5/JS support. Which now means they can see my nicely rendered 3D logo all in CSS courtesy of Mark Otto. Wonderful, but how to get my visitors to install Chrome Frame?

Once Chrome Frame has been installed the user-agent header can report its presence.

Given that we can detect if Chrome Frame is installed it’s possible to selectively prompt visitors to install it for IE if they haven’t done this already. There’s a great guide on the process on the Chromium site here. However, I didn’t want to just go about pasting the scripts snippet into my HTML body here. I mean that’s why I’m using Octopress and not just native HTML right? Let’s programmatically decide if we should push our IE friends toward the Chrome light.

So how to inject the Chrome Frame javascript in Octopress? Let’s begin with a configuration directive to test against in our _config.yml.

Now that we have a clause to test against Octopress can decide on whether or not to build the chrome frame code into the site. The only piece left was to decide where the code should reside. Octopress is pretty good at maintaining a custom directory structure for modifications to the base. It’s a good idea to keep that structure so updates to the core are easier to maintain. Head.html seems to be the logical place for onload scripts to me, so I made my custom changes there.

Now I declare when the code should be included given our config.yml directive using Liquid markup syntax with an if block for site.chromeframe.

I paste in the chrome frame installation script from the Chromium example linked above and modify it for my needs, and we’re almost good to go. I really didn’t change much. I opted to use overlay mode for the prompt because I’m not quite sure where I’d like to inject it inline. The only issue with overlay (besides annoyance to my visitors), is that it doesn’t seem to work on IE7 and earlier. I insert a to the head to enable chrome frame for my pages content (this would normally be done in the http server config, but as I don’t have access to that…).

Giving us the final product of…

So far so good, now we can deploy and test;

Success! My IE visitors will now be greeted with an overlay prompt enticing them to install chrome frame. 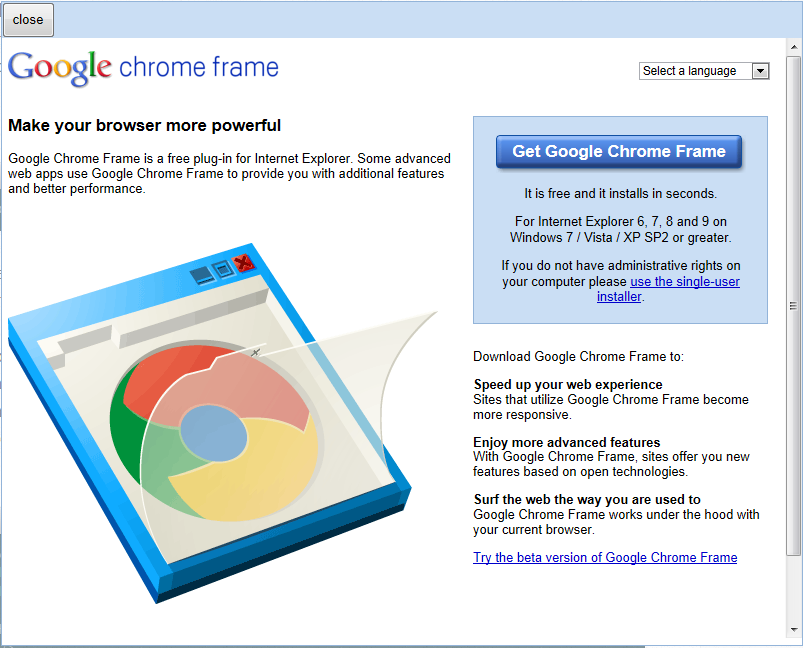 Now if only they’d install it (or even better just get a full Chrome or Firefox browser in the first place). Most importantly I learned how to control a feature of my site by manipulating _config.yml and custom overrides to the stock templates. Fun times!

My name is Ryan, and I'm a geek. Hence this blog will have geeky topics;

Oh, and there might be an occasional post about hockey, punk, and non-technical stuff. I apologize in advance...